Building on the backdrop of 3 summer teams WildFire once more embarked on a summer adventure to Cagayan de Oro, Philippines. The team of 10 ranging in ages from 15 to 30 set off with the following self-penned mottoes...

"Mission statement: We are going to Cagayan de Oro to partner with God & the Filipino community so that healing, practical skills, joy & peace would be released in all spheres of influence. We're doing this because we're called to reveal the hope that Jesus has for all lives."

"Team covenant: dear brothers & sisters, let's seek unity as family with one God our father. Let's choose to honour & encourage our different giftings & communicate constantly with God & with each other. In doing this we hope to ensure the holistic health of our team's body and desire growth together."

Before heading out we invited our prayer partners for an evening of worship, intercession & sharing. Amid many encouraging & specific words from the Lord one of our friends gave us Deuteronomy 28 which became our main teaching and impartation to the people that the Lord led us to partner with.

This summer's trip was especially memorable as the team were initiated into part of the Higa-Onon tribe. The Higa-Onon people have traditionally been a collection of nomadic tribes moving throughout the mountains of Mindanao in the southern part of the Philippines. More recently the government has asked the nomadic people to settle on what has been called their 'ancestral domain'.

Not used to farming the land, delegations of tribal people have been sent to the foot of the mountains at the outskirts of the city in order to access funding and to gain education which will facilitate better farming of the ancestral domain, greater economic empowerment & ultimately a higher living standard.

On our very first day visiting the tribal community we entered with the simple aim of getting to know some people, ask some questions & share life together. We gathered at the local pastor's house & then set about with him and some of his family & friends to meet tribal members & other people who live in the same area. During this time we saw several people get healed, a misaligned hip & spine came back into correct alignment at the name of Jesus which led to a friend of the guy who got healed deciding to give his life to following Jesus. As you can imagine, this was all pretty exciting! The team's faith and boldness was growing, including the team member who had, until now, labelled herself an agnostic.

This continued over the following week with a broken leg and seized back getting completely restored & the man going from walking bent double to running in the space of a few minutes - he continues in this freedom today! We also saw many fevers disappear as well as various other pains/ailments.

These healings plus the grace and love being poured out by the local church & the WildFire team alongside them began to create quite a stir, with many people bringing friends & relatives who needed healing or simply wanted to see what all the fuss was about. These people gathering & becoming friends made it very easy to find people to partner with on some of the projects we started to discover a need & desire for...

The team spent time investing in the Higa-Onon families in such a way as to facilitate long term change & benefit. Firstly the team trained community members in basic preventative healthcare - the kind of things many of us do without thinking - brushing teeth, washing hands, cleaning cuts & grazes. On top of this the team learned the theory & then, in partnership with locals, (tribal & non-tribal) installed a deep well with pump to provide clean water & a toilet/shower block complete with a 3-part septic tank for sanitary waste disposal. It is amazing what you can do with some local know-how alongside the ability to Google something. Of the back of these installations we were able to teach about the fact that good sanitation is something laid out in scripture & that, actually, application of scripture to our lives enables us to live life really well in community & we prosper - that is exactly what Deuteronomy 28 is about! Go check it out!

As well as this new (for the tribe) technology we were able to leave in place a scheme for match funded mico-savings to allow community members to start their own small businesses without the need to rely on loan sharks & lengthy agreements of systematic injustice. This work has already allowed 4 tribal kids to continue to attend school. 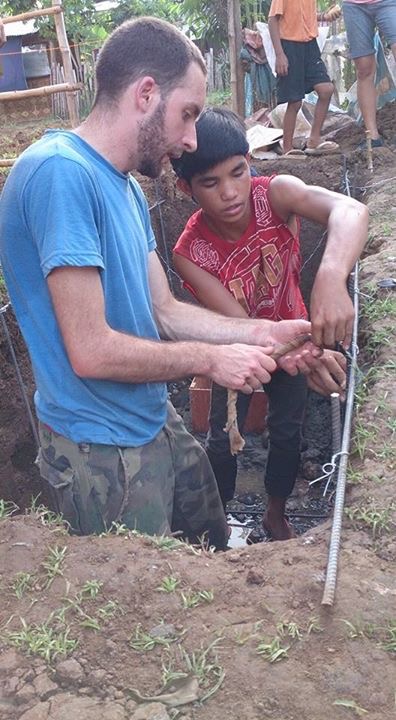 When the team wasn't getting dirty digging holes & then teaching kids to wash the dirt off their hands, we were usually to be found eating, laughing & sharing stories around a dinner table. Lots of social action without being part of the family - who, to our mind, are the people we eat with - can result in us doing things to people or for people. Both of these constructs are sometimes needed (think major surgery or disaster relief zones) but they never go as deep as doing things with people. Meal times & hanging out allowed us to listen to the heart of these dear people, to understand their heritage, hopes and desires & then to partner with them in the little ways that we could to see these aspirations, in part, realised.

It was these intimate times coupled with partnership that led to the Higa-Onon tribal elders asking if we would like to be part of the special ritual to become members of the tribe. Now, when one thinks of a tribal ritual, there's smoke, chanting, strange artefacts and maybe an animal sacrifice or something and, well, that's exactly what happened. An extended welcome of pleasantries & prayers, an excruciatingly long section of chanting, some waving of fruit, tobacco & various leaves & then the entrance of the pig who was, as expected, sacrificed along with several chickens - we'll spare you the details apart from the fact that we do know the pig to have had a full and free life prior to the event. The formal ritual wound down as we were gifted with tribal bracelets & clothing. The evening progressed with lots of chat and some games before the pig and chicken reappeared in boiled form along with several mountains of rice!

Alongside our major focus on partnering with the tribal peoples & surrounding community the team spent time teaching in local schools, leading kids clubs, caring for vulnerable people on the rubbish dump, learning about Filipino street culture & enjoying some of the lush beauty of the Philippines.

What Next in the Philippines?

Now, being part of the tribe, we have been asked to travel through the various ancestral domains & explore how we can partner with mountainous tribal people in kingdom initiatives in similar ways as we have begun to at the foot of the mountains.

This feels like the start of a long and exciting journey. We have a lot to discover, a lot to learn & a lot of hard work to do. We've started researching & making contacts that will enable us to learn a range of skills & technologies in order to better partner with the people of inner Mindanao & beyond in achieving their aspirations. We have enabled some of our local Filipino partners and some tribal members to get educated in permaculture implementation. We're sending some of our leaders out to the Philippines & Taiwan in November to meet a number of people involved in some of these technologies & we are also hoping to get hold of some land to trial some of this innovation in the UK. We also hope to be able to involve some existing teams and perhaps even start getting some school students involved as part of their curriculum but also help nurture an increased global perspective in young people & their families; who can then be empowered & released to nations to partner in the kingdom of God!

We have also just been approached about the possibility of establishing a training centre for Tribal peoples to learn al of the above! (Watch this space on that one).

- Send a family or individual - group together as a church, small group, youth group to send a delegation with one of our teams

- Partner financially by contributing toward a team budget or for a specific project - get in touch to know how to do this!

WildFire in the Philippines, August 2018